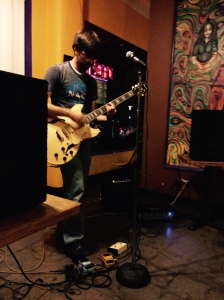 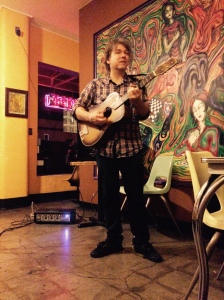 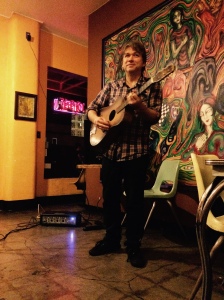 We had a great time at the show at Interzone last night! Thanks to Sam and Bill and Interzone for getting it put together. I was super excited to finally try out my stereo chorus pedal – I’ve had it for years but never actually plugged in a second amp. I think the two-amp approach was a success — it gave the solo electric guitar a lot more depth and gave some variety as well.

The crowd turned out to make an excellent choir for the bridge of 16 Tons.

Michael Ulm played while I was packing up my gear and hauling it to the car, so I unfortunately only heard two of his songs.

Darren Hanlon’s set was amazing. He’s an Australian folk singer who recently settled in Portland. His lyrics are packed with deft wordplay, wry observations, and insightful character sketches.  Definitely come see him play if you get the chance. He’s great to talk to, as well.

Daniel is doing a solo set at Interzone in Corvallis this Friday. He’ll be opening up for Darren Hanlon and Matthew Ulm. Also, it’s free, so there’s nothing to lose, right? That way you can spend your ticket money on merch — Darren has a new album out!